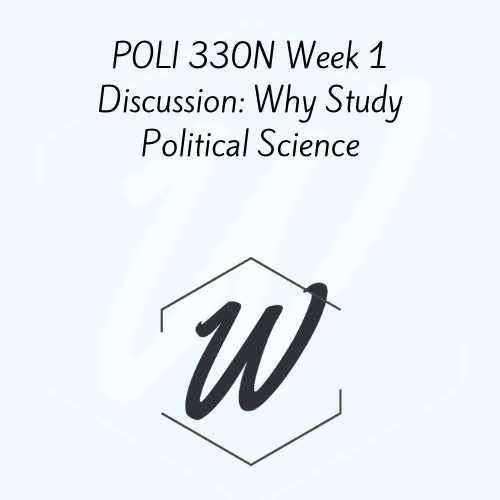 “Political science is the systematic and scientific study of politics, including institutions, behaviors, and processes” (Whitman, 2020).  It is important for students to learn how to study politics as a science using observation, hypothesis, and analysis to gather information, research the results, and analyze the findings to determine if the political stance is something that they agree with and what they would want for their community and country.  It has always been important to me to be informed and educated on political affairs that affect the minority community.  With systematic oppression, current movements, and the latest elections I was doing background research to see where politicians stood.  It may not have been scientific research, but I did perform my own research and came up with my own hypotenuse. So political science is very pertinent in my daily life.

I definitely put this class off until I could not anymore.  I was never interested in politics and I’m still not confident about this class but it is important to have some sort of understanding of politics. Political Science sounds intimidating to those who are not in the field, we feel it has nothing to do with our major so we shy away from it, even though it has Science attached to it.  “Some students decide to major in it because they want to go to law school or into the military or because they already know they want to be a politician. Others won’t even go near a political science class unless it’s required because they “know” they won’t like it” (Whitman, 2020).  It is an important course and I hope to expand my perspective on the subject during the duration of this course.